Driver
The Buick Regal is a red coupe that appears in Driver. It is the default car in New York

It is a red coúpe. It has a white roof and gray glass.

This car appears only in the missions Hide the Evidence, Guns in the Trunk and Luther's Heap O' Junk Something very curious is that it appears on a single mission in New York since this is the default car. In the missions it is replaced by the Chevrolet Nova. 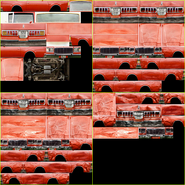