"Learn some manners, or you're head is gonna be leaking out that shake."

-Jericho threatening a henchmen that was slurping a shake out loud while Jones and Caine were talking in Driver 2. 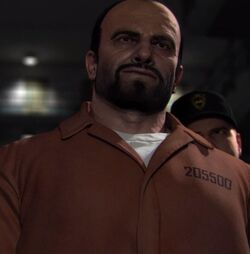 "I'm gonna pop your neck with my hands."

-Jericho to Tanner after being taken captive.

He is first shown at the beginning of the game, driving through the streets of Chicago with a friend. The two arrive at the Red River Bar to kill Pink Lenny, Caine's former accountant who defected to Alvaro Vasquez, a Brazilian crime lord and Caine's rival. Jericho and his gangster friend did this under Caine's orders.

Although they manage to kill a Brazilian henchman who was meeting with Lenny, Lenny barely escapes the shootout with his life, and the armed men are forced to leave due to the police arriving at the scene.

Next, Jericho is seen with Caine confronting Tanner, who tried to search for evidence in one of Caine's safehouses. Caine calls for Jericho, who mockingly informs Tanner that he shouldn't worry, because he'll shoot him in the head. However, Tanner elbows Jericho in the face, knocking him down and escapes Caine's compound. After this, Tanner and Jones leave Chicago and head to Havana, which is what Caine has Jericho do since Pink Lenny is rumored to be hiding there.

He arrives in a hotel in Central Havana, where he prepares to execute all of Lenny's bodyguards. Unbeknownst to him, Tanner and Jones were following Jericho to the hotel, where Tanner is unable to prevent Jericho from killing the men, but nonetheless rams Jericho off the road in a chase. Tanner and Jericho then form a truce and head to Vegas to meet Caine, and they reluctantly start working together.

After Vegas, Jericho, Tanner and Jones arrive in Rio with Caine, where Jones starts working for Vasquez as an inside man, while Tanner works with Jericho and Caine. Later, when Tanner finds Lenny trying to flee Rio in a helicopter, Jericho and Tanner chase him.

After the two shoot down Lenny's helicopter, Tanner reveals his true colours to Jericho and forces him to drop his sawn off shotguns at gun point. Tanner tells Jericho to tell Caine he needs Lenny more than they do before Jericho coldly says "I'll find you." It is assumed Jericho was arrested by the Rio Police as police sirens are heard getting closer as Tanner drives off.

Sometime afterwards, Jericho allegedly bears witness to Vasquez and Caine burying the hatchet and rekindling their friendship underneath the statue of Christ The Redeemer.

"Remember me? I remember you. You're the cop and I'm the guy who said I'd find you."

-Jericho revealing himself to Tanner.

He then, via The Gator, is introduced to Calita, leader of the South Beach gang, who wants to ship a number of luxury cars into Europe.

Jericho reveals himself to Tanner in a warehouse in Nice, France when he is after the person who is behind the car thefts of South Beach gang. Jericho guns down a French Interpol agent who was working with Tanner, and is about to kill Tanner but he manages to escape.

Tanner points his gun at Jericho, but leaves him alone and walks away. Jericho takes the opportunity and shoots Tanner in the back. Both appear in a hospital, and one of them flat-lines but the doctor uses a defibrillator on him.

"You got thirty more years in here. I'm asking thirty million. It's not a hard choice."

-Jericho during the prologue.

They arrive to see Jericho transported into prison, but end up chasing him when he escapes with the help of some hired thugs; Leila Sharan and an unknown prison guard.

While in pursuit, Jericho seemingly vanishes when Tanner and Jones pursue him into an alleyway; he then shows up behind the latter two and proceeds to ram them off the road, resulting in Tanner's car being hit hard by a truck. Jones survives, but Tanner is put into coma. Tanner figures out Jericho's plan in his dream world while battling Jericho's more powerful Shift powers. When he wakes up, he immediately goes after Jericho, with the pursuit eventually ending in a warehouse by the docks. Both are about to collide into each other when Jones shows up in a police SUV and crashes into Jericho, which puts him into a coma.

In Driver 2, Jericho drives multiple cars though he notably drives a 1962 Pontiac Catalina in the introduction scene. During the game he is seen with a 1976 Mercury Monarch in Chicago (which is apparently the same car he had in the intro cutscene), a 1953 Chevrolet Bel Air in Havana, a 1973 Mercury Cougar in Vegas and a 1965 Ford Thunderbird in Rio.

In Driver 3, Jericho is only seen driving a 1961 Chevrolet Impala during the first mission in Istanbul.

In Driver San Francisco, Jericho first drives a Police suv during the prologue. Afterwards he drives a Dodge Ram SRT-10 pickup truck in Tanner's coma dream and in the final stages of the story.