Driver: In Driver it is a gray Pick-Up and a little light blue. In this game is a 1981 Dodge Ram double cab and appears in a single mission. As additional data accelerates to 90 mph

It is the only Driver mission in which it appears. The player will have to take some explosives from the shelter (the same one where you were on the Weapons In The Trunk mission) to an alley. You must be careful with the box in case you drive too hard or roughly you will break the box until it explodes 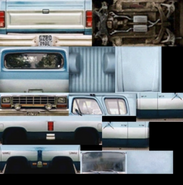 It is now a more modern Dodge Ram of 1986. Also of course in this game it has several more colors.

There are two variants, the "small" 2006 Dodge Ram SRT-10 and the Dodge Ram 3500 Heavy Duty. While being Dodge vehicles, in-game they are manufactured by RAM.

A black Dodge Ram SRT-10 is used by Charles Jericho; this vehicle is encountered sereval times during the final parts of the storyline.