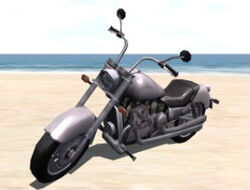 "A slightly heavier motorcycle than the Antilli, the Whole Hog has the ability to electronically brake (or 'twist') from a stop, but this does not work at high speed, so you must also brake when cornering. it's a Heavy motorcycle difficult to ride at high speed without falling over. The Whole Hog may satisfy your motorcyclist urge, but it's not as accurate as the other two-wheeler offering. A professional driver is needed to ensure Tanner is not thrown off this little pig. "

-Description in the official guide.

The Farley FLH Whole Hog is a custom cruiser motorcycle featured on Driv3r.

It is a cruiser motorcycle with touches of a Chopper motorcycle, originally silver in color that appears on the streets of Miami.

It is big, heavy and low, it has a relaxed handling position and it is only available in silver. Along with the Chopper they are the only custom type motorcycles in the series.

It has a two-cylinder v twin engine with 1,130 Cubic Centimeters (69 Cubic Inches) water-cooled. It has dual rear shocks on the rear wheel and inverted front suspension. the wheels are spoked and it has a mini rear passenger seat. the footpegs are forward and it has dual exhaust pipes

It reaches 130 miles per hour (209 km / h), has 110 horsepower, weighs 485 pounds (220 Kg) and its wheelbase is 1.75 meters. Despite being the heaviest bike in the game, its speed and performance are very decent, being optimal for cross country riding. It is inspired by the Harley Davidson V Rod.

It can be found on the streets of Miami. or selectable in the Take A Ride selection screen. 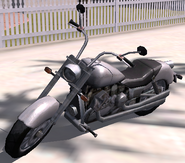 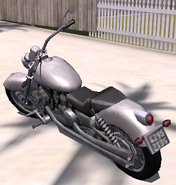 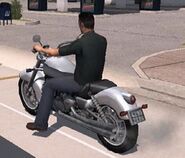