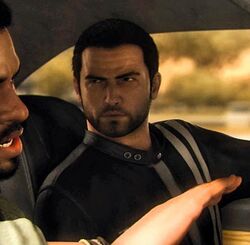 John Tanner is an undercover police officer and the main protagonist for most of the Driver games.

This section reflects upon Tanner in the 5 major games of the series.

In Driver, Tanner is working for the NYPD. He was an ex-race car driver whose career ended due to an accident. His superiors have sent him to infiltrate the Castaldi crime family in order to find out what their big plans are and have asked him to turn in his badge for the time being. In order to prove himself to the gang, Tanner must complete a number of challenges in a parking garage. Once he has passed the initial test run, he takes a number of jobs from various criminals all over Miami, San Francisco, Los Angeles, and New York. In New York, Tanner discovers that Castaldi's plan is to assassinate the U.S. president, so Tanner rescues the president while under attack from the police and FBI. After rescuing the president, his superior officer, Lt. Mackenzie, congratulates him and offers him his badge back. However, Tanner declines the offer.

In this game, Tanner is voiced by Bradley Lavelle.

In Driver 2, Tanner is working with the Chicago Police Department tracking down someone named Pink Lenny. Pink Lenny was a money man for a gangster named Solomon Caine, but has defected and now works for Caine's rival, Alvaro Vasquez. In Chicago, Tanner and his partner Tobias Jones follow up various leads to find out where Lenny is headed next. Along the way, Tanner runs afoul of Caine and his hitman, Jericho. Tanner escapes from him and heads to Havana with Jones.

In Havana, Tanner stops some of Vasquez's weapons shipments s follows up a lead on Rosanna Soto, which actually turns out to be a ship headed for San Diego. Tanner discovers that this means Lenny is headed for Las Vegas next. While calling Jones, Jones tells him that he's spotted Jericho and that Tanner should get over there as soon as possible. After tailing Jericho, Jericho performs a hit on two Brazilians, after which Tanner heads to Vegas with Jericho in custody.

In Vegas, Tanner offers to release Jericho if Caine works with them on finding Vasquez. Caine agrees, and Tanner is sent to work on various jobs, including sending a car bomb to one of Vasquez' casinos, stealing an ambulance, and most importantly, destroying one of Vasquez's supply dumps. Due to Caine's help, Tanner tracks Lenny to Rio.

In Rio, Tanner does some more jobs for Caine, such as destroying some of Vasquez's cars with a bus, stealing a limo with some cash, and blowing up a supply barge. However, Jones' cover has been running thin by this time, so Tanner must rescue him from a shootout at a water tower. When he gets there, he discovers that Jones has been wounded by gunfire, and upon Jones' urging, he chases down the gunman. After this, Tanner and Jericho head to the fort where Lenny is taking off in a chopper. At the fort, the two shoot at the chopper and manage to damage it. Tanner orders Jericho to drop his weapons and then goes off to pursue Lenny on his own. Tanner eventually comes to the chopper's crash site, apprehends Lenny and brings him back to Chicago.

The voice actor for Tanner in Driver 2 is unknown, as the IMDB page for the game the wrong actor.[2]

Tanner has become an FBI agent and is working with the Miami Police Department and has been assigned to infiltrate a car theft ring known as South Beach. In order to do this, Tanner must steal a Corvette from the Gold Coast Hotel. After this, he must pass a series of tests given out by Lomaz. Once he is accepted into the gang, Calita, the gang's leader, gives him some more jobs, one of which is to hunt down a local crime lord known as The Gator. After the Gator is assassinated, Tanner and the gang head for Nice.

In Nice, Tanner ends up rescuing Calita from a group of French gangsters and steals so

me cars for the gang. During this time, Tanner runs into two policemen from INTERPOL, Henri Vauban and Didier Dubois, who are also working on the case. Tanner also runs into trouble from a French crime lord named Fabienne, who puts a bomb in Tanner's car and also gets Calita trapped in a shootout. Tanner gets out of both situations and kills Fabienne. At one point, Tanner and Vauban team up to rescue Dubois. After Dubois is rescued, Tanner and Dubois head to a warehouse to collect a laptop with intel. However, Tanner runs into Jericho again, who kills Dubois. Tanner escapes and tracks Jericho to Istanbul.

While in Istanbul, Tanner tails Jericho to a secret location and learns of his plans. However, Vauban thinks Tanner killed Dubois and sends the Istanbul police after him. Now a rogue agent, Tanner decides to follow up a lead on The Bagman and pursues an arms dealer. Tanner then decides to pursue Calita while Jones goes after The Bagman. Tanner captures Calita after a brief chase and gets back into the good graces of Vauban and the Istanbul Police Department. After stopping an explosives truck, Tanner pursues a train carrying Jericho and ends up defeating him in a final showdown. However, Jericho regains consciousness for a long enough time to shoot Tanner in the back.

In the hospital, both men are in critical condition. One of them flatlines, but it is unknown who. It is also unknown who receives the defibrillator at the end.

In this game, Tanner is voiced by Michael Madsen.

Tanner does not make an appearance in this game, however TK's apartment in the 2006 era has graffiti on the wall that says "Tanner Lives!" as well as "I love Tanner". Whether or not these were a hint to the then-upcoming video game Driver: San Francisco is unknown.

The game takes place six months after the events of Driv3r. It is revealed that both John Tanner and Charles Jericho survived the shootout in Istanbul. In the game's trailer, it is revealed that since then, both men have recovered and Jericho has escaped to San Francisco, while Tanner and his partner; Tobias Jones have pursued him there. Jericho is shown being transported in the back of a prison truck, but manages to escape with help of a hijacked KEOC chopper commandeered by assassin Leila Sharan who fires an RPG at the convoy, and a vial of acid hidden within his mouth by a guard. He overpowers the guards and steals the truck. Upon witnessing this, Jones and Tanner pursue Jericho as he causes havoc in the city. They enter an alley where Jericho ends up driving behind them, and uses the prison truck to ram Tanner's Dodge Challenger in the path of a truck, resulting in a devastating crash which puts Tanner into a coma, where the majority of the game takes place.

Whilst in a coma dream, Tanner soon discovers his ability to "shift" into another person's body, retaining his persona but, to everyone else, looking and sounding exactly the same as the person he has shifted into. Tanner can use this ability in missions, activities, dares, or free drive, whilst trying to figure out Jericho's plan. After deducing that Jericho is after the materials to create a cyanide gas bomb, he shifts into Ordell, a low-time crook looking to rise up through Jericho's organization.

Unfortunately for Tanner, he discovers that Jericho can also shift, and realizes that when he is not in his body, Jericho can take over. He is deconspired, when disguised as Ordell, drives Leila to her target (John Tanner). Eventually, Tanner learns that he is in a dream world when the strange messages from the real world creep into his mind. Jericho's powers become more potent, but as it is in Tanner's head, he is over-powered and defeated when Tanner assumes control of his mental projection of the city. In a mental visualization of a police interrogation room, Tanner begins questioning his mental projection of Jericho and discovers that the news reports from the television in his real-world hospital bed are feeding his coma dream. From this he knows of a real-world bomb plot, but deduces that it is not real - Jericho is a gangster, not a terrorist.

Finally waking up, Tanner requests his car keys from Jones, who reminds him of the crash from the beginning. Tanner leaves in Jones' Chevrolet Camaro and heads for downtown San Francisco, which is being evacuated due to a bomb threat, when a massive cloud of gas erupts. Tanner finds escaping convicts, confirming his theory that it was not a real terror threat. Jericho made a deal with a prisoner for $30 million to break him out of jail. The "bomb" is in fact a smoke screen. Tanner pursues Jericho through Soma into the Hunter's Point docks. Before Tanner can take down Jericho in a warehouse, Jones rams Jericho in a police SUV. Tanner claims that he knew what he was doing, but Jones reminds him whose car he was driving, before suggesting a well-deserved beer. The fact that Jericho got T-boned, just like Tanner at the beginning of the game, and the song "Eye for an Eye" playing in the background, implies that Jericho was put into a coma.

In this game, Tanner is voiced by Demitri Goritsas.

Outside of the five major games in the series, Tanner has appeared in the following mobile games below. The story lines for these games have no effect on the main storyline and are not reflected upon in any way between each other.

As a prequel to the original Driver, Tanner is a rookie cop. His partner, Alvarez is killed in a high speed chase. Tanner goes undercover with Tobias Jones to catch his killer. He gains the trust of Solomon Caine and his Bay Street Crew. After finding out that Caine killed Alvarez, Tanner eventually captures Caine. It is unknown whether or not this game is canon to the main series.

Taking place between the events of Driver 1 and 2, Tanner saves Senator Andrew Ballard and agrees to eliminate 5 crime lords for him. He is granted permission to use what ever means necessary to kill the crime lords. After finding out that Ballard is the ring leader of the campaign, he chases him down and has him arrested. It is unknown whether or not this game is canon to the main series.

Tanner appears in the game as a supporting character rather than a protagonist.

Both Tanner and Jericho have survived the events of Driv3r, so Tanner ends up pursuing him to Las Vegas.

Tanner has been recruited by Chuck of the LAPD to take down the Los Angeles mob.

Tanner is the protagonist in every game he appears in.

Tanner throughout the years 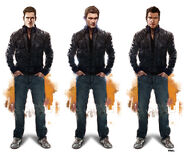 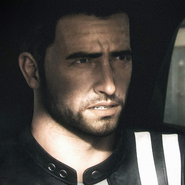