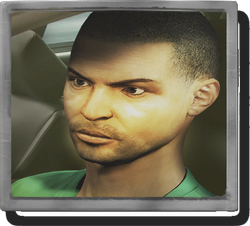 Ordell Williams is a minor character from Driver: San Francisco. He is a small-time crook working for Jericho's crew and looking to rise up through the ranks. John Tanner uses Ordell as a disguise by shifting into him.

Ordell is a small-time crook working with Jericho's organization alongside his friend, Darius Spencer. Ordell is looking to work his way up through the ranks of Jericho's crew. They are first seen trying to get to a meeting with a man named Jimmy. Tanner shifted into him at this point to help him.

Tanner then used Ordell as a disguise so he can rise up in the ranks of Jericho's crew and gather information on Jericho's cyanide-gas bomb plot. He took control of Ordell when helped an unknown criminal escape police. He then gained the trust Leila Sharan in a test.

Ordell was then supposed to assist Leila in assassinating Tanner. Leila actually knew that Tanner could control Ordell. After Tanner's cover was blown, he left Ordell's body and he was never heard from again. It is unknown if he is still alive or not.