"You should have seen the look on this guy's face. He was feelin' the pain. My handgun settled in between his eyes; I let him chew on a piece of my boot..." - Pink Lenny talking to his Brazilian friend. 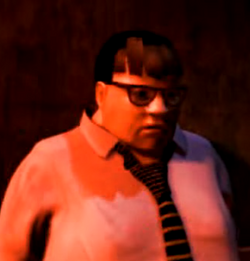 Pink Lenny is the true main antagonist of Driver 2, and the former money man of American crime lord Solomon Caine.

His betrayal of Caine when he went over to Brazilian gangster Alvaro Vasquez triggers a massive gang war between the two sides in both the United States and Brazil, with both seeking to exploit his extensive financial expertise for their own ends.

Pink Lenny was once a loyal employee of Solomon Caine before eventually cutting a deal with Alvaro Vasquez, one of Caine's former associates. Caine soon discovers this and soon seeks revenge by having Lenny killed or captured. One night at the Red River Bar in Chicago, Lenny and a tattooed Brazilian gangster are having a chat, with Lenny telling the thug about the time he once held a man at gunpoint ("You should've seen the look on this guy's face"). Moments later, Caine's lieutenant Charles Jericho and another gangster burst in and kill the mobster, forcing Lenny to take cover before fleeing out the back door. The police arrive before Jericho can finish the job, and the two men flee the scene. Alarmed at the gang war brewing on Chicago's streets, the authorities send John Tanner and Tobias Jones undercover to find Lenny and discover his part in the conflict.

Some time later, Lenny flees to his apartment and prepares to leave town before Caine or Vasquez can come for him. Just as he goes to meet his getaway driver, he is greeted at the door by one of Vasquez's thugs. Lenny tries to opt out of the deal now that Caine knows what he's done, but the thug holds him at gunpoint reminding him that he's now theirs, and Lenny is soon after moved to Havana where Vasquez is making his next move.

Tanner and Jones track Lenny to Cuba, and learn of his and Vasquez's intent to meet up with a mysterious contact named Rosanna Soto as they prepare to leave the country. It's eventually discovered that Rosanna Soto is actually a cargo ship, smuggling weapons and resources to Vasquez's base in Las Vegas to resume the war against Caine. With Lenny on the run again, Tanner tracks down Jericho who's just finished another hit on the Brazilian mob, and takes him into custody to negotiate a truce with Caine.

Soon after, Tanner and Jones join forces with Caine to track down Lenny, reasoning that without him Vasquez would no longer be able to wage his war on Caine's criminal empire. With Lenny under his wing, Vasquez escalates his attacks on Caine, which include a failed car bombing of one of Caine's safehouses. This attack fails when Tanner drives the bomb-laden vehicle back to Vasquez's casino. Tanner and Caine succeed in sabotaging Vasquez's supplies in the city, before finally storming his main base. However, Lenny is nowhere to be found, and while interrogating one of the gangsters Caine and his men discover that Vasquez has returned to Rio with Lenny. The gangster warns Caine that he stands no chance, and that Vasquez would come back for him. Caine however is totally unfazed by this, saying "he can do what he likes, dead man. I'm coming for Lenny" before killing the wounded thug.

Caine, Tanner, and Jones all meet in Rio to discuss their next move to stop Vasquez. Jones notes that Vasquez did not act on the chance to stop Caine even though he's been keeping tabs on him all across the city in case that came to pass. Jones asks for an explanation, but Caine ignores this and insists he'd deal with Vasquez himself. Tanner and Jones continue their pursuit of Lenny as Vasquez continues to push his attacks on Caine back in the States. Fearing more bloodshed, the two men agree to make sure Lenny never leaves Rio, with Jones using his cover inside Vasquez's mob to find an opening for an attack. However, Vasquez catches on to Jones' true identity, and attempts to have him murdered. Tanner however stops the hitman and then orders Jones to get out of the country. Jones refuses, insisting on seeing it through to the end.

Tanner and Caine proceed to destroy more of Vasquez's supplies bound for the United States, and Vasquez soon opts to have Lenny flown out of Brazil to an unknown location. Jones warns Tanner of this, and is soon after gunned down by Vasquez's hitmen. Tanner however manages to save his partner's life, and runs the hitmen off the road. With Lenny's chopper inbound at the fort, Tanner prepares to move out, but not before Caine orders him to collect Jericho to help him finish the job. At the fort, the two men arrive just as Lenny flees the seen in the helicopter, and the two men open fire. The chopper is quickly shot down and flies uncontrollably over the city, and Jericho gives the order to continue the pursuit. At this point Tanner reveals his true colors and holds Jericho at gunpoint, forcing the man to drop his shotguns and tells him to "tell Caine I need Lenny more than he does". Jericho promises to get revenge on Tanner as he leaves in Jericho's car to go after Lenny.

Tanner chases Lenny's flaming chopper all across Rio, dodging Vasquez's hitmen who try to stop Tanner before he denies them their greatest advantage against Caine. They fail however and the chopper finally crashes in a nearby park, killing the pilots and leaving Lenny injured and defenseless. Tanner soon arrives on the scene, mocking Lenny's "popularity" as it seems everyone was after him, but that he doesn't care what he knows. Lenny attempts to fire his gun at Tanner but is quickly disarmed, and the furious cop proceeds to severely beat Lenny for all the damage he has caused. Lenny is finally arrested and Tanner returns with him to Chicago to be taken away by the police.

With Lenny now out of the picture, Vasquez is no longer able to continue his campaign against Caine, and most of his gangsters are forced to abandon Chicago and Vegas. However, Tanner's superior officer notes that Caine and Vasquez are still free, but Tanner reasons that without Lenny the two men would be "back where they were before". It is revealed that the two crime lords were once partners as they both sport the exact same tattoos that were prominent in Vasquez's gang. Without Lenny, the two men finally call a truce in Rio, ending the gang war between the two sides for good.

Lenny is then dragged away in cuffs and is never heard from again, presumably still in prison for his part in the conflict.