Driver - Driver:San Francisco
The Pontiac LeMans is a four-door vehicle that appears in Driver and Driver: San Francisco . In Driver it is the default car of Los Angeles

Driver: It is somewhat bluish gray. It is a four-door vehicle (of the few in the game). It has somewhat dark glasses. As a final fact, the speed is not as good as what you would expect from this car, so it is recommended that you change it for the Pontiac Firebird or the Chevrolet Chevelle in the missions. 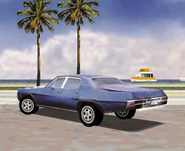 Driver: San Francisco: The 1971 Pontiac LeMans coupe is a bit smaller than the Driver 1 version and has a maximum speed of 125Mph (200 km h).