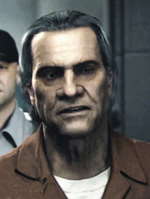 Rufus Russel is a minor character from Driver: San Francisco. He is an inmate in a San Francisco Prison and pays Charles Jericho to break him out of jail.

Little is known about Rufus. What is known is that he is a high-profile inmate in a San Francisco prison who seems to know Jericho. He pays Jericho $30 million to break him, and all the other convicts, out of jail in his cyanide-gas bomb plot: Once Jericho escaped prison, he would set off a smokescreen thought to be cyanide gas. The entire city would be cleared out, allowing convicts, like Rufus, to roam freely.

At the time of the deal that he made with Jericho, Rufus had to serve 30 more years in jail.

Rufus was last seen talking to Jericho after the explosion of the smokescreen. It is unknown whether or not Rufus was able to flee San Francisco. It is possible he was captured later on.