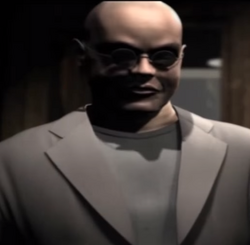 - Caine revealing himself to Tanner

Solomon Caine is the main antagonist in Driver 2 and a minor character in DRIV3R. Caine was seen again in the Wii version of Driver: San Francisco (which is a non-canonical prequel to the first Driver game).

Charles Jericho worked for him as his faithful bodyguard until the day he turned against the king mobster and killed him, taking over all his business. After DRIV3R, Caine is never mentioned or seen again.

In Driver 2, Caine is one of the highest ranking mobsters and owns an empire spanning from Chicago to Las Vegas. It is even mentioned by Tanner to Jones and Their Boss that an undercover Brazilian working for Vasquez and spying on Caine's gang, had shotgun shells superglued in his mouth, covered with gasoline and set on fire. Pink Lenny, a money launderer and a key piece to many of Caine's business betrays him to work for his rival, Alvaro Vazquez, Jericho is sent to kill him. However, the job was a failure and left a trail which allowed the Chicago Police Department to get involved and bring John Tanner to the case.

At some point, Caine has learned of Tanner's nose on his business and put him to death, having failed to do so, a bounty on Tanner's name was assigned. Meanwhile, a war between Caine and Vazquez unfolds in both mobsters' territories, with each one trying to take over the arms business.

When Tanner and Tobias Jones capture Jericho, they team up with Caine to go after Lenny in exchange for his henchman. They agree and Tanner works as his wheelman. After alot of tasks and driving for the gangster, Tanner breaks up the partnership and left Jericho to presumably arrested by Rio Police, to catch Lenny by himself.

It is revealed before the Statue of Christ Redeemer that Caine and Vazquez, they were never enemies, and somehow, all the infighting between them was some sort of plan by both to consolidate a new alliance.

In Driv3r, Caine is only seen in a short cutscene. He walks into an elevator with Jericho. Behind his back, Jericho shoots him in the head. This was possibly due to the fact that Caine allowed Tanner, an undercover cop, to work in their crew and get away. Although since this is never really confirmed, is is assumed Jericho thought it was time for him to step up and take over. Later he is mentioned by Jones when he says Caine "Isn't returning our calls" but likely later found out that he is dead as he narrated the scene in which Caine is killed.

In the Wii version of Driver: San Francisco (which is a prequel to Driver 1), Caine runs the Bay Street Crew in San Francisco. He plans to set the Dog Fish and Dragon Ladies gangs against each other to create a market for weapons. He kills Tanner's partner Alvarez in a high-speed chase. Tanner went undercover with his crew to find the killer. When he found out that Caine had killed him and his plan, he chased Caine down and he was eventually arrested.