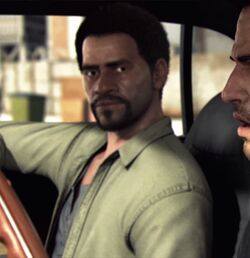 Tobias Jones is Tanner's partner and his closest friend in the Driver series. He is the secondary protagonist in most of the Driver Series.

In Driver 2, Tanner and Jones are working with the Chicago Police Department tracking down a guy named Pink Lenny. Pink Lenny was a money man for a gangster named Solomon Caine, but has defected and now works for Caine's rival, Alvaro Vasquez. In Chicago, Tanner and Jones follow up various leads to find out where Lenny is headed next. Jones gets into some trouble with the Brazilians. Due to this, Jones and Tanner escape to Havana.

In Havana, Jones and Tanner discover that Vasquez is shipping weapons in Havana. Jones offers to dig up information on the shipments and a mysterious person named Rosanna Soto. Jones discovers four cars in the city that could potentially have a file on Rosanna Soto. While Tanner is working on Rosanna Soto, Jones has tracked down Caine's hitman Jericho to Havana. Tanner meets up with Jones and tails Jericho.

In Vegas, Tanner and Jones hand Jericho back to Caine in exchange for doing a few jobs for him. With the Las Vegas Police Department figuring Jones as one of the Brazilians, Jones decides to infiltrate Vasquez' gang & asks Tanner to take him to the airport. Under heavy police pursuit, Tanner manages to drop Jones off at the airport so he can go to Rio. In Rio, Jones has found out that they're moving Lenny very soon and has a plan to get the details on where they're moving him to. However, Tanner warns Jones against staying in Rio any longer. Eventually, Jones gets into a shootout at a water tower and is wounded. He urges Tanner to chase down the gunman. Somehow, Jones manages to survive his wounds.

In this game, Jones is voiced by Antonio Fargas, who also appeared in a commercial for the original Driver.

In Driv3r, Jones is once again partnered with Tanner and serves as the narrator for the game's cutscenes. In this game, Jones is voiced by Ving Rhames.

Following the scandal involving Pink Lenny, the two of them are promoted to the Federal Bureau Investigation after being offered another investigation by the Miami Police Department, where the illegal repossession crew headed by Calita Martinez, "South Beach," is currently operating. Afterwards, the police department learns of the whereabouts for Baccus, an infamous delusional criminal with psychopathic tendencies who drove for his crew before betraying them and selling their V8 to Tico, another gangster operating in Miami who became the primary rival for the crew following their emergence; Tanner and Jones arrive at Baccus' apartment, though in the process, a gunfight breaks out and the latter flees, forcing Tanner to pursue him across the city before the pursuit leads to him crashing his vehicle and sprinting through an alleyway. Unfortunately, whilst Tanner takes the car keys for the V8, he mistakenly assumes that he was carrying a weapon and killed him; afterwards, the two of them meet once again and the former is reprimanded by Jones, who cautiously warns him against any involvement with the crew and uses the background history of their members as an example, though this fails to dissuade Tanner from continuing with the investigation itself and he successfully retrieves the V8 before his final test, which involves destroying Tico's compound and also killing several of his gangsters in the process.

Soon after, Tanner is required to destroy the yacht of the Gator, an infamous criminal kingpin working with the crew before betraying them in a previous deal, ultimately leading to the destruction of the yacht as retaliation. Frustrated with their actions, the Gator secretly gives away the location of their next vehicle sale to the police, who are unaware of Tanner's undercover status, and the latter is forced to assist the crew in escaping, before disposing of the vehicle. Simultaneously, Tico attempts to assassinate Tanner for retrieving the V8, although a violent pursuit and gunfight leads to the former's death instead, permanently wiping out his gang and territory in the process. Tanner conveys his collected information with Jones, with the two of them quickly learning the true intentions of the crew; they intend to sell each of their stolen vehicles to Europe, and they agree that with this power and influence, they are most likely working with someone else. Unbeknownst to them, the supplier heading the gang was Caine, whose reputation within the criminal underworld was falling apart, leading to his assassination at the hands of Jericho, who immediately takes over his criminal organization and becomes the new supplier for the crew, though he remains completely unaware of Tanner's involvement for the time being.

Afterwards, the Gator unsuccessfully attempts to have Tanner killed in another deal with the crew, with Calita, enraged at his third betrayal, sending the former to kill him in retribution. Following this, the crew relocates on the orders of Jericho, traveling to Nice, France. However, Jones is instructed by Interpol to remain in Miami in the process, with the agency sending Henri Vauban and Didier DuBois to assist Tanner with bringing the crew into custody. Unfortunately, Tanner and the agents are immediately hostile towards one another regarding the methods being used for the investigation; Tanner insists on prolonging his undercover status to discover their true boss, though Vauban and DuBois insist on hauling the stolen vehicles before the sale is completed in the process. Tanner and the crew collect the vehicles and assassinate Fabienne, another rival gangster whom the gang stole from during their criminal activities, leading to Vauban sending DuBois to infiltrate their compound. However, DuBois is captured and interrogated, revealing to them that Tanner is undercover; the crew forces a surprise meeting between the two of them and Calita demands that the latter kill the former to prove his trust, and Tanner decides to kill DuBois to prolong his undercover status, though the weapon's bullet magazine got removed earlier and is replaced with one containing a tracking device. Afterwards, Tanner and Vauban rescue DuBois from the crew the night before he is scheduled to be executed; Tanner and DuBois are both sent onto a secret mission to collect the crew's laptop from the boathouse, which contains information regarding where the vehicles will be sold, but the tracking device exposes Tanner's undercover status as the crew arrives, with Jericho reuniting with the former and killing DuBois with his weapon, though Tanner quickly escapes from the boathouse and retreats to Vauban, with Jericho destroying the laptop and leaving the gun with DuBois' body.

Following the revelation that the sale of the vehicles will commence in Istanbul, Turkey, Tanner arrives there to search for the crew, following Jericho to their meeting with the Bagman, the notorious gangster known for his modus operandi who will assist the crew in successfully delivering the vehicles for the upcoming sale as well. Eventually, Tanner learns that the Gator survived his gunfight and realizes that Jericho is sending goons to kill him in Miami, though Jones successfully organizes his safety with the police department before flying straight to Istanbul to reunite with Tanner and actively assist him with their investigation of the crew's secret activities. Following the death of DuBois, the Internal Affairs agents begin to investigate Tanner following suspicion from an enraged Vauban, forcing him to retreat from the General Directorate of Security and investigate any further activities by the crew. Eventually, Tanner and Jones discover that Lomaz, one of Calita's enforcers, is heading deals with several arms dealers throughout Istanbul and they track down one of their dealers, who reveals the latter's location. Following this, Tanner and Jones then capture and interrogate Lomaz, who reveals their drop site, where the Bagman will be meeting with Calita, though the latter quickly realizes that something is wrong, which leads to her canceling the deal as well. Simultaneously, Jones chases the Bagman into an ambush and is forced to retreat from them whilst Tanner successfully captures Calita, earning Vauban's trust once again.

Afterwards, Calita reveals that the vehicles have already been delivered into Russia, before revealing the drop site, where the Bagman will deliver Jericho's money in exchange for protection, with Vauban placing cameras around the area and the Bagman delivers only half of their agreed amount of money, intending on delivering a briefcase containing second half following the completion of the merchandise checks, though Jericho quickly becomes dissatisfied and kills him instead. Tanner and Jones pursue Jericho's bomb truck, killing their driver, whom they discover is Bad Hand, and realize that this was a distraction, whilst Jericho escapes onto the train station. Whilst Jones and Vauban track the train, Tanner pursues the locomotive and then heads it off, forcing Jericho to pursue on foot; afterwards, the General Directorate of Security arrives and violent gunfire begins as Tanner, Jones and Vauban pursue Jericho across the streets whilst several police officers and henchmen who are participating in the gunfight are massacred in the process. Eventually, Tanner corners him in the streets as they engage in a gunfight, with the former prevailing; however, Tanner ultimately decides not to kill Jericho, to the latter's amusement before he uses his last ounce of strength to shoot him; Tanner and Jericho, comatose from their extreme blood loss, are sent to a hospital and are urgently operated on by the surgeons present.

Six months after the Istanbul shootout, Jones continues to work alongside Tanner in San Francisco. He is mostly seen in Tanner's hospital room after he is put into coma when they severely crashed while chasing the escaped Jericho. However, in Tanner's dream world, Jones works alongside him in bringing Jericho down. When Tanner wakes up, Jones originally assumed that Tanner was not making sense when Tanner tells Jones that the bomb was not a real one, but he eventually gets convinced, and allows Tanner to borrow his Camaro to go after Jericho. Jones soon realises that Tanner was right after the truth about the bomb was made known to him, and grabs a police SUV In a warehouse at Hunters Point, just before Tanner and Jericho are about to collide head-on with each other, Jones arrives in the police SUV and collides right into Jericho's pickup truck, implying that he had been put into a coma, like Tanner had been before.